Starting in 1989 Karen & Bob Curry were one of the first breeders of purebred American Miniature Horses in New Zealand. From just a few the herd grew to over thirty by 2005 with numerous progeny on sold each year. As part of their pasture management with the miniature horses the Curry’s cross-grazed mainly white-faced (Hereford-cross) cattle, which they bought in as weanlings and on sold to the beef market at around 18 months to 2 year old. As the horses are so selective in their grazing and crop the pasture very close to the ground, weeds were a particular problem without the cross grazing of cattle. The horse/cattle combination worked well, but with cyclic low returns from the beef market, Karen & Bob were looking at specializing into breeding pure-bred cattle to on sell to other breeders and life-stylers.

The opportunity arose after seeing the White Galloway at the Mystery Creek Field Days in 2003 and meeting with breeders John & Beryl Cleland of Ngutunui Stud in the King Country, who were starting to disperse their herd at the time.

Suncrest Galloways started with four cows from Ngutunui and with a combination of breeding by out-sourcing sire services, further purchases, and breeding from their home bred bulls (Suncrest Arctic Bayley & Suncrest Arctic Eddy).

Karen & Bob’s fully pedigree registered herd became established in numbers to around 20 head - 10 breeding cows, and 2 bulls, with the balance in heifer and bull yearlings and calves – most of which are sold on to breeders and lifestylers.

One of the most successful moves has been the development of a web site – suncreststudnz@gmail.com, which has created a lot of interest in the stud, typically receiving in excess of 400 visitors and ~10,000 hits per month. Enquiries, mainly re cattle average around 2 per week, and many of these have led to sales and the making of long lasting friendships.

Whilst not setting out to breed miniature cattle Karen & Bob happened to breed an exceptionally small bull with good conformation, standing at ~85cm high as a rising two year old. Suncrest Arctic Eddy has been put over a smallish cow, the results of which was a tiny heifer calf as shown below. 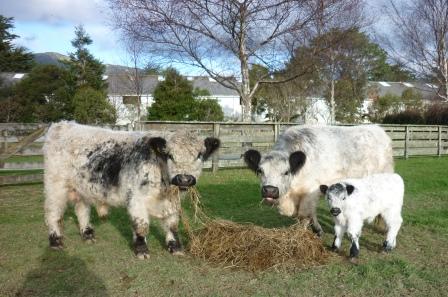 Surprisingly enough there has been a lot of interest in miniatures through the Suncrest web site, and like the Highlands, small lifestyle block owners are particularly keen to have attractive, but small cattle, to minimise winter pugging on their small blocks.

The Galloway’s easy calving and ability to maintain weight during the winter months has enabled a successful breeding programme to be established, but the grazing of lush ex-dairy land has been a challenge requiring the need for extensive strip grazing to control weights during most of the year.

Karen & Bob are always keen to meet with fellow cattle breeders and farmers, to talk about the breed and compare notes and stock. They welcome farm visits and inspections of their herd so, if interested, please give them a call or arrange to pay them a visit.