The Galloway is one of the world's longest established breeds of beef cattle, named after the Galloway region of Scotland, where it originated. Galloway cattle adapted to the damp harsh climate and developed characteristics that identify the breed today. The Galloway developed the ability to thrive on limited grasses and graze the roughest of forage. These cattle distinguish themselves with their superior calving and mothering ability, and originally were used for dairy and beef. The breed exemplifies hardiness, manageability and longevity. It is now found in many parts of the world. Although black is still the most common colour for Galloway cattle, they can also be red and several shades of dun.

In New Zealand the distinctive White Galloway was first registered with the New Zealand Galloway Society in 1994. Like the Standard and Belted breeds, it has its own separate Herd Book. The breed is currently being upgraded in New Zealand from Standard Galloway cattle.

The colour pattern of the White Galloway is mostly white, with its colour restricted to its ears, feet, and around its eyes. They will also often have colour on their poll, tail, and udder. The White Galloway breed is an ancient one and was originally distinctive of the Wild White cattle of Britain. These are typified by the surviving British White, Chillingham and White Park herds. The herd of White Park cattle at Cadzow Park, Hamilton (adjacent to Galloway) is believed to be the source of the special colourings of the White Galloway.

The Galloway is naturally hornless, and instead of horns has a bone knob at the top of its skull that is called a poll. This breed's shaggy coat has both a thick, wooly undercoat for warmth and stiffer guard hairs that help shed water, making them well adapted to harsher climates.

Why you should own or breed White Galloway Cattle

The following outlines the reasons why you should own or breed White Galloway Cattle:

Hardiness
The Galloway’s heavy, double haired coat means that heat loss is reduced, winter feed costs are significantly less and rain hardly penetrates in cold, wet weather. The Galloway cow has about 600 hairs per square centimetre making the coat resistant to severe cold as in their country of origin – Scotland. Galloway’s have in fact, been used on stations with an average rainfall as low as 150mm and with their superior foraging ability, have thrived in these harsh, pastoral areas.

Naturally polled
The Galloway breed is naturally polled and when crossed with another breed it will prevent the growth of horns in virtually all cases.

Feed conversion efficiency
Tests have shown that the Galloway requires the least amount of feed per kilogram of weight gain making the cattle very efficient converters. Galloways consume more varieties of flora than any other breed in tests conducted in Germany.

Fertility in the cow herd is the single most important factor in obtaining the maximum returns per hectare in a beef breeding operation.

One of the most notable characteristic of the Galloway female is her ability to rear calves under all conditions naturally. In Australia, the Galloway has proven itself not only in the cold climates but in hot climates where cows have survived severe droughts and difficult conditions with a healthy calf.

High fertility
The Galloway is an extremely fertile breed; the cows are long lived, regular breeders and are noted for their ability to produce healthy, well nourished calves at weaning, even in the harshest of conditions. Some Galloways have had two separate calves in one year.

Easy calving
Calving difficulties, or dystocia, is a problem many cattle farmers know only too well.
They know heredity plays a large part in this problem, along with management. But they may not know that there is a beef breed renowned for introducing ease of calving into a herd, along with other worthwhile commercial traits.

The Galloway Cattle breeds have achieved an outstanding rate of calf survival in various tests and trials undertaken in research centres around the world.

One had only to look at the history of the breed to understand why Galloways are so easy calving. Evolved over centuries in the highlands of Scotland, the Galloways had to calve by themselves. If the calf was too big or the cow’s pelvic measurements were incorrect, the calf, cow, or both would die. Over the years this created a natural selection for calving ease which is a genetically strong feature of the breed today.

An increasing number of dairy and beef producers are using the Galloway over their heifers to produce an easy calf for the young cow, and at the same time produce a worthwhile beef animal.

The Galloway calf at birth is smaller than most breeds – average birth weights are 35kg for males and 31kg for females.

Galloways are an extremely fertile breed, regularly producing a vigorous live calf. The Galloway cow is a protective mother and has an abundant supply of milk. 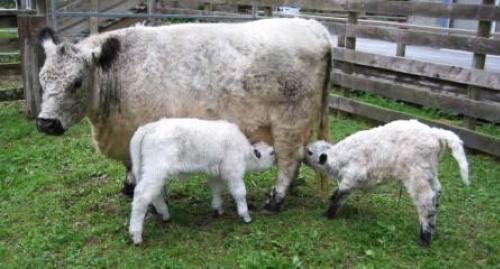 Cross-breeding
There are many excellent reasons for choosing the efficient Galloway in a cross-breeding programme.
The breed developed in the harsh Scottish highlands, and the historical necessity to forage has developed a high proportion of muscle to fat and has practically eliminated calving problems.

The females are highly suited to joining with other breeds, with their easy calving, good mothering, and ability to do well in any conditions.

Galloway bulls have the ability to produce an even line of calves – in colour and high quality carcasses from mixed line of cows. The Galloway colour dominance in cross breeding ensures 100% polled calves from horned females.

Galloways are also good for the environment. In Germany they are the second most popular breed, highly regarded for all the attributes mentioned here but also because studies show Galloways do least damage to the environment than any other cattle breed. This is due to their non selective grazing and their ability to wander hills to forage. Galloway cross animals have good bone structure, excellent muscling, and conversion efficiency that characterises the breed.

Disease resistant
The breed evolved in a harsh environment, resulting in high disease resistance and the ability to survive in the toughest of conditions. Galloway breeders find that their cattle are more resistant to pink eye, insects and foot problems than many other breeds.

Longevity
Galloways have a reputation for longevity – many are reputed to live until 17-20 years of age.

Excellent Beef Qualities
Galloway Beef has been shown in a research study conducted at the University of Guelph – to have a total fat content of about 2%, an extremely low percentage.

The same study showed that the Galloway Beef tested only contained about 1% saturated fat. In addition it showed that Galloway Beef had the same fat content as chicken and fish so fits in well with a healthy diet.
Galloway Beef is exceptionally tender, full of flavour and juicy. Data collected in USA has shown that Galloway beef dresses out at 60-62% of live weight making it a very profitable breed.

Beef Meat Fat Study
For about 3 months, January to March 1994 five steers and one heifer, all purebred Galloways were fed daily about 3.5kg of milled barley and oats, along with hay ad lib. The cattle were aged 18-24 months. At slaughter carcass weights were 130-200kg. Samples of the meat from the inside round and rib roast were analysed and averaged by the lipid analytical laboratories of the university of Guelph. The results were fairly consistent.

In April 1994, six randomly selected non Galloway Cattle (mainly cross bred Limousin, Hereford & Simmental) were similarly sampled by the same butcher and analysed for lipid content by the same laboratory. These cattle came from the same feedlot where they had been admitted at age 6-8 months and kept for 10-12 months on a diet of 4.5kg corn silage, ground corn, ground barley and soya beans. They had no hay except for the initial few weeks.

In August 1994 three yearling solid black Galloway bulls were similarly analysed. They had been grain fed mainly oats and some corn ,working up to 4kg per day with hay ad lib for 140 days. It was noted that their meat was exceptionally lean. Studies of the three groups were blind as the laboratory did not know the source of the samples in any of the cases. In all cases the meat samples were raw.